How to measure moisture in concrete 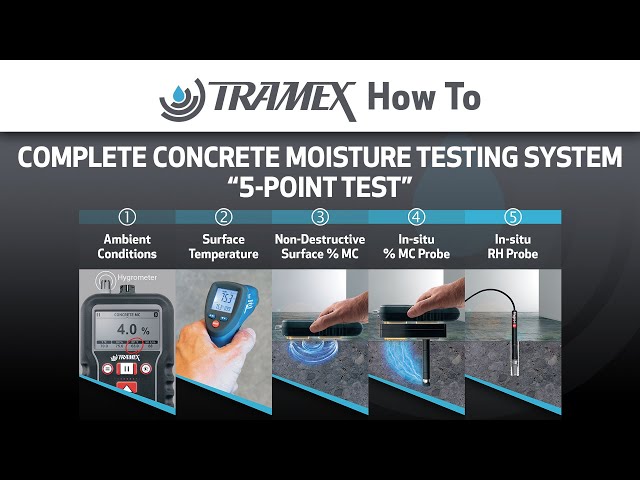 Below is the transcript of the video:

Hi, I'm David from Tramex Meters and today I'm at RTI and we're going over a 5-point concrete moisture test to quickly determine the moisture condition of a concrete slab.

For the first step, we're going to be looking at ambient conditions, and it's important to understand that these conditions can change and that they will affect the results of the test. The necessary tool for this is a hygrometer, which might be attached to a moisture meter in this case, or it can be a separate hygrometer. But the main points we're going to be looking at are temperature, relative humidity, and dew point. And here we're looking specifically at the dew point. So, I have two meters here one is our feedback Data Logger, which I'm looking at on the App and it's showing me that the ambient dew point is 50 degrees Fahrenheit, and also on my CMEX5 concrete moisture meter we're getting 50 degrees for the ambient dew point through the hygrometer on that meter.

So, the third point we're looking at is the percentage of moisture content in the top three-quarter inch of the slab, and we're doing this using our Concrete Moisture Encounter depressed to the surface of the concrete. Now, we want to make sure that it's a clean dry surface, free of any drywall mud, paint, or any coating on that surface that needs to be removed, so we can get a good indication of moisture. Now, keeping in mind that this will give an indication of surface moisture and it can be caused by ambient conditions, or it could be coming from below the slab, and we're going to take readings at each location around the clock, 12 o'clock, three o'clock, six o'clock, nine o'clock, and we're going to keep the highest reading.

For the fifth step of our concrete moisture test, we followed ASTM F2170 for in situ RH readings. We did this by drilling a hole to 40% depth of the concrete slab, then inserted a sleeve, and capped that sleeve. Now, we wait 24 hours to insert the RH probe and this allows the heat created by drilling that hole to dissipate, so it doesn't affect our readings. After 24 hours, we come back, insert the RH probe, and take our readings, and this can be gathered with the rest of our data points so that we can make consideration of the actual moisture condition of the concrete slab.