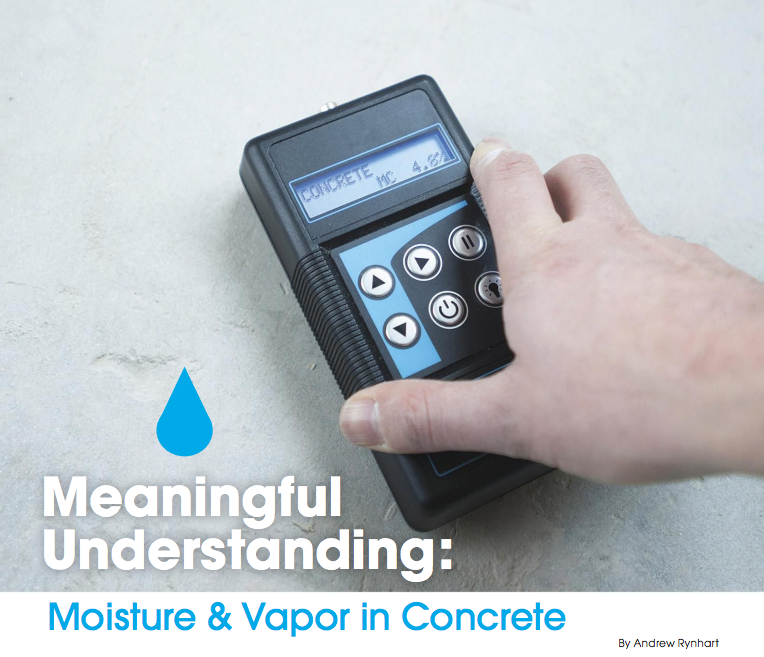 In the restoration industry, the level of understanding of moisture in building materials is generally very high. However, there is a tendency to treat concrete with suspicion and it is not uncommon for waivers to be used to reduce liability for the drying contractor. This is understandable considering there are many unknown variables in concrete, partly due to it being the only building material fabricated on site. Adding to the confusion about moisture in concrete is a mistaken assumption that measuring the vapor in concrete equates to a measurement of the total moisture content in the concrete. This assumption has contributed to many mistakes being made in the flooring and restoration industries. A better understanding of the meaning of measuring both the moisture and the vapor will go a long way to removing much of the confusion and allow for better decision making.

The Importance of Temperature and Equilibrium Equilibrium Relative Humidity (ERH) measurement, as per the ASTM F2170 standard, is a way of measuring the vapor in an airspace in equilibrium with the moisture in concrete as a percentage of the maximum vapor which the airspace can hold. For the results to be meaningful, it is important that the air is in equilibrium with the moisture in the concrete, which is why it is referred to as ERH not RH. However, this does not mean ERH measurement is a measurement of the moisture content. Relative Humidity is used rather than Absolute Humidity because the temperature of the air has a dramatic effect on the amount of vapor the air is capable of holding, making the absolute humidity measurements such as Grains Per Pound meaningless for this purpose.

To explain this simply, the Equilibrium Relative Humidity and the Humidity Saturation Point will both be affected in the same way by the changing temperature. As such, the ERH remains meaningful at different temperatures whereas the absolute humidity levels change. This highlights the need for the humidity to be in equilibrium with the moisture in the concrete, again explaining why it is referred to as ERH and why the temperature must remain stable during the measurement phase. Variables when ERH testing ERH measurement per ASTM F2170 gives useful information about the condition of the concrete but due to variables including the unknown amount of un-hydrated cement present and the unknown level of air permeability of the concrete, it cannot be considered an accurate measurement of the moisture content. To understand this more clearly, the vapor saturation level needs to be considered. It is often assumed that vapor will always saturate at 100% RH but this isn’t necessarily the case.

Take a salt calibration check for example: there is humidity saturation identified by the presence of liquid water but the RH is at 75% due to the presence of salts. Combining Non-Destructive Impedance and ERH Testing Adds Value Measuring the impedance of the concrete is also commonly used to identify the moisture content of the concrete. ASTM F2659 was written to standardize the methodology for carrying out this test. This is a practical site test, which is popular due to its ease and speed of use. However, there are variables which make the moisture content readings less meaningful, especially if we don’t know the vapor level within the concrete. For example, different ambient conditions will alter the Equilibrium Moisture Content (EMC) and different aggregates can absorb and adsorb moisture differently, also affecting the EMC. Therefore, a combination of measuring both ERH and Moisture Content is advisable. The combined approach can be compared to looking down a rifle and lining up two iron sights, instead of one. Ideally, an ERH of 85% will line up to a moisture content of 4% and 90% ERH will line up to 4.5% EMC but when they do not line up there is much information which can be gained about the concrete which would otherwise be unknown if relying on one of these test methods alone.

Many things can be learned about the concrete by combining different test methods, including identifying concrete which is highly alkaline which can have a low ERH to MC level, or identifying concrete with a high Vapor to MC level, which indicates a good quality concrete. Concrete needs a minimum RH of 85% in order for hydration to continue to take place, this hydration will continue to reduce the MC while, ideally, the RH remains at 85% or above until all the hydration is complete. Consider the Ambient Environment and Age of the Concrete Further testing of the ambient conditions is important to improve the meaningfulness of these results, as there are conditions from the environment which can also affect the relationship between the MC and ERH. The age of the concrete also needs to be taken into consideration as most moisture or RH specifications are made for new concrete where construction water is still present. Older concrete, where the moisture should be in equilibrium with the average ambient conditions, is also easier to understand with a combination of testing. Achieving Faster, More Efficient and Reliable Testing With meaningful and simple training, a technician is able to make much more informed decisions based on the data from combined tests, thus removing many of the unknowns as to the condition of the concrete.

Although more testing is carried out, the combined testing should actually be more efficient and much faster. Quick tests such as impedance are used to create a moisture map and more difficult testing such as ERH testing should be used as much as necessary to confirm the vapor condition of the slab, rather than as a method of moisture mapping. This is over time-consuming and doesn’t add to the value of the data. There is little doubt that there is a lot of room for improvement when it comes to testing concrete for moisture that can lead to potential flooring issues. The current methodology has many an expert scratching their head trying to understand the rationale for it. The view of this author is that the combination of ERH and Impedance measurement along with ambient measurements is enough to answer most questions about the condition of the concrete. However it is not the only way that this can be done. There are different methods developed in different parts of the world including tests which combine both humidity and moisture testing and there are several ways to achieve more meaningful information. The first step in improving one’s knowledge is to move away from the idea that one test competes with another, - a doctor would not for example refuse to use an X-Ray because an MRI is better. He or she would use the most practical means available to achieve the information needed to treat a patient, and that’s just pragmatic and good practice.

This article was first published in "Restoration & Remediation Magazine, May 2017 Issue."