How does dew point affect moisture in concrete? 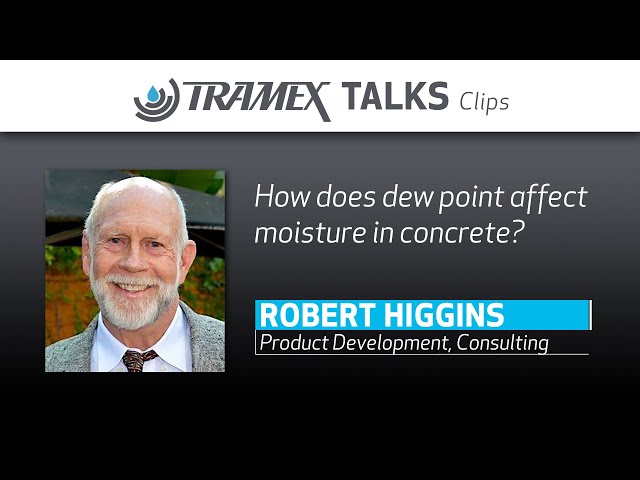 If the concrete slab is at a temperature that is not at least 10 degrees F (5 degrees C) above the dew point of the room, condensation will form in the top layer of the concrete, that cannot be seen by the naked eye, creating all sorts of issues with your coating or floor covering.

This condensation is in the top 1 inch of the slab and can be detected by the Tramex Concrete Moisture Encounter Meters, the CME5 and CMEX5, and then moved out by running fans across the surface of the slab until the %MC readings come down to acceptable levels. This is why checking %MC, surface temperature, and ambient conditions at the time of installation is so critical to successful floor covering installations.

In this video, Bob Higgins gives us an example from the field.

Here's a transcript of the video:

When we brought in a hygrometer, that's part of the moisture encounter, and a moisture meter along with an infrared thermometer, we've been able to catch issues that are being introduced at the time of installation.

I'm going to give an example.

I remember a few years back, there was a project in San Diego, it was a high-tech building and very very critical installation. I was brought in because they had an elevated moisture issue and I was representing the moisture control company at the time. So when I looked at it and I saw that with the moisture levels were versus what the quality of the concrete was, and it was water cured, there were no curing compounds, so I know it was done correctly as far as the calcium chloride method was used, I said: well that can't be the issue because concrete of that quality can't have that high of moisture Vapor emission level, so it just can't. So I think it's coming from the air, the ambient conditions. And so we were debating that and there were eight of us in the room. Well, thankfully I had the hygrometer on with the Tramex meter and I left it on while we were talking. When we started the meeting and walked into the room the relative humidity was only 52%. When we finished talking it climbed all the way to 78%. I said: now I'm absolutely convinced that's what it was, this is created by the ambient conditions.

So let's recreate the installation and see what happened. So they decided to do that. So they brought in the installer, the same exact flooring materials, and they started, and the relative humidity is a little higher, it's about 55 when they started. Well, when they finished spreading the adhesive the relative humidity in the room climbed all the way up to 90%! It was a water-based adhesive so they put the floor down and predictably it failed. Because what happens is the concrete was cooler than the room, water moves to the cool side, so what happened it created its own dew point. So even though it's skin and it's set up the way it was supposed to according to all the instructions that were given to the installer, so it wasn't the installer's fault, they did everything correctly and it still failed and failed in exactly the same manner.

They said: well how do we fix this? I said: we use fans. But unfortunately, because these rooms are so small, we're gonna have to bring in a dehumidifier. So, we were testing the floor and the Tramex meter was pegging a little bit over five, it's about five and a half percent, so we put the fans on the floor and after about two hours it brought it down to under four and a half. I said: now we're ready to go, but we have to keep the fans on and blow it, because we tested all around the floor and the floor was dry, it was all under four and a half percent. I said: now what we have to do is keep the air moving but we need to put on the dehumidifier and keep the humidity in the room at less than 60 percent, keep it between 55 and 60 percent. So they did that and as they spread the adhesive, let it tack up, they put the floor back down. It was so well adhered that they were just storing the floor trying to do the pull tests, they couldn't get take the floor.

So exactly the same conditions, just by controlling the relative humidity in the room, completely cured the problem. Now to show you how important that was, for this project, a shutdown for this project, there were 12 rooms, was a million dollars per day per room if they shut it down. That's how high-tech this thing was. So this is big Stakes. So they went ahead and duplicated that effort in all 12 rooms and it went perfectly. So even though I was selling a moisture control at the time, I said: this is not a moisture control issue. We could have slapped our magic juice down here and what it would have seemed to have corrected the problem, but we would have fixed nothing.